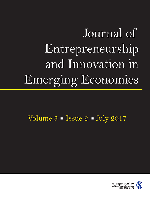 Journal of Entrepreneurship and Innovation in Emerging Economies

A significant body of research in migrant entrepreneurship has addressed venture creation by ethnic entrepreneurs (EEs) in their host countries (Basu, 1998, 2011; Deakins et al., 2007; Ram & Jones, 2008). Studies have also explored business and technological expertise of returnee entrepreneurs (REs), and their role in the development of high-tech industries in emerging economies (Filatotchev et al., 2009; Pruthi, 2014). Research on migrant entrepreneurs makes clear distinctions between other types of migrant entrepreneurs and transnational entrepreneurs (TEs) that cross host country borders to commercialize a business idea in their home countries (Drori, Honig & Wright, 2009). The phenomenon of transnational entrepreneurship implies a distinct opportunity structure, which enables those migrants who found and maintain businesses to benefit from ‘two worlds’ as a crucial factor for survival, a way of breaking out, and/or a method for providing competitive advantage (Terjesen & Elam, 2009). TEs are an important source of innovation that contributes to economic development in both host and home countries. Apart from enabling a globalization from below in developed host markets (McEwan, Pollard & Henry, 2005), TEs also make available, locally, a wide range of managerial, technical and international marketing skills through their ventures in emerging home markets (Breshnahan, Gambardella & Saxenian, 2001; Parthasarathy & Aoyama, 2006).

Compared to other international entrepreneurs, differences in migrant entrepreneurs’ behaviour may stem from their unique social networks, market specific knowledge and experience (Elo & Volovelsky, 2017; Riddle, Hrivnak, & Nielsen, 2010), or even cultural, linguistic and religious features that represent particular resources and competences for internationalization (e.g., Brinkerhoff, 2016). Recent research has explored the role of migrant decision makers in the internationalization of their ventures to their home countries (Chung & Tung, 2013). Studies have also explored the motivations, typology (Drori et al., 2009; Elo, 2016; Portes, Haller, & Guarnizo, 2002) and economic contribution of TEs to their host and home countries (Portes et al., 2002; Wagner, Head & Ries, 2002). However, little is known about networks and capabilities, locational dynamics, mechanisms and processes that migrant entrepreneurs employ in identifying and exploiting opportunities in multiple institutional contexts (Brinkerhoff, 2016; Tung, 2008). With few exceptions, international entrepreneurship (IE) research on individual founders of international new ventures, or strategies and performance of migrant entrepreneurs beyond the host and home country duality, is limited (Elo & Freiling, 2015).

Transnational entrepreneurship can be conceptualized in both positivist (a phenomenon) and constructivist (a subjective abstraction) terms. This inherent conceptual duality mirrors the dual habitus presence of TEs. Crucially, it embraces other concepts of ethnicity, race, internationalization, globalization, migration and diasporas to name a few, all of which have merited attention in different studies on entrepreneurship. New research could, therefore, offer rich perspectives to enable a better, nuanced and critical understanding of this relatively less explored subject of our times.

The aim of this Special Issue is to make a theoretical and empirical contribution to the IE literature by exploring the international entrepreneurial processes of migrant entrepreneurs and TEs that initiate and conduct entrepreneurial processes in at least two social and economic arenas. Key themes include, but are not limited to, the role of multiple institutional contexts, social and human capital, and heterogeneity of migrant entrepreneurs and TEs as focal actors in the creation, organization and growth of transnational and international new ventures (Autio, Sapienza & Almeida, 2005; Oviatt & McDougall, 1994). TEs can be envisaged to operate their dual structures between developed economies, between emerging economies, or between developed and emerging economies (Drori et al., 2009; Wright, Pruthi & Lockett, 2005). These different trajectories likely involve different challenges for TEs (Hoskisson et al., 2013; Kiss, Danis & Cavusgil, 2012). Entrepreneurial action of TEs is constrained by their home country endowments due to variations in home country institutional structures (Yeung, 2002, 2009). They also have to cope and adapt to, and form strategies shaped by, institutional constraints, political-economic structures, and dominant organizational and cultural practices in both previous and currently adopted countries in which they operate (Portes, 1995; Saxenian, 1999, 2002, 2005). There is a need to understand how varied institutional contexts and differences, rather than merely their personal attributes and innovative capacities, shape the way they operate. The literature on TEs of ethnic origin in developed markets describes the significance of ‘transnational communities’ for the transfer of knowledge back home. However, not all TEs form transnational ventures (TNVs) from the position of being based in the host country; they can also do so from being based in the home country (Drori et al., 2009).

TEs are not passive adherents to institutional constraints, but actively mould them to suit their own unique initiatives. They leverage opportunities arising from their dual fields and networks, optimizing resources where they may be most effective (Drori et al., 2009). Unlike EEs, TEs go beyond ethnic ties in venture founding, using class or national resources to expand business contacts beyond their ethnic group (Gold & Light, 2000). TEs open up a new frontier to develop insights on the nature of global and local networks that link individual resources at the micro level with structure at the macro level (Chen & Tan, 2009). As employees of multinational corporations (MNCs), diasporas often encourage their employers to investigate the possibility of investing in the diasporan’s country of origin (Kotabe et al., 2013). TEs’ prior experience of entering the home country with a former  mployer may impact the nature of social capital in venture founding in the home country (Pruthi & Wright, 2017a). An understanding of TEs’ social and human capital in venture founding opens up the possibility for new insights regarding the behaviour and contribution of migrant entrepreneurs (Yang, Ho & Chang, 2012). An established stream of literature (e.g., Deakins et al., 2007; Light, Rezaei & Dana, 2013; Portes & Zhou, 1992) explores the role of personal or ethnic ties in venture founding by EEs, mainly in their new country of residence. Where entrepreneurs’ connections in both host and home countries are explored, they are mainly in the context of internationalizing EEs that extend their firms to the home country (Chung & Tung, 2013), or REs that draw on their connections abroad to found new ventures upon returning home (Lewin & Zhong, 2013; Lorenzen & Mudambi, 2013; Nanda & Khanna, 2010; Pruthi, 2014; Wadhwa et al., 2011). In contrast, we know little about the link between migrant entrepreneur’s and TEs’ social and human capital, or how they use social ties to overcome resource constraints in venture founding. As the role of social capital in venture founding is quite diverse among ethnic communities in developed markets, even in the same host country (Nwankwo, Akunuri & Madichie, 2010), entrepreneurs from different ethnic groups need to be systematically studied to understand the nature of their social capital in transnational activities.

Also less understood is the link between the structure of TEs’ social networks and pattern of growth (Pruthi & Wright, 2017a, 2017b). Founded by migrants and continued by their descendants, some family businesses, for example, grow to become leading firms and expand beyond their countries of residence (Discua Cruz, Howorth & Hamilton, 2013). These firms often connect back to their countries of origin from their very outset and involve a collective approach by members of one or several migrant family generations, a process supported by hard to imitate resources nurtured by transnational family networks from various parts of the world over time (Sirmon & Hitt, 2003). While the entrepreneurship literature advocates the role of non-family, weak ties for growth (Jack, 2005), the IE literature suggests that entrepreneurs that first enter their home country to found a TNV are more likely to found ventures that are ‘born global’ (Oviatt & McDougall, 1994, 2005). Therefore, research may examine the performance of TNVs in TEs’ home country, and whether TEs that complement family ties with other ties are more successful than others. Prior research on migrant entrepreneurs has looked at migrants that are either first generation or undifferentiated in their embeddedness in the host country (Janjuha-Jivraj, 2003). While first-generation migrants may be embedded in their home country based on strong family connections, second-generation migrants are likely to be more integrated with their host country (Bachkaniwala, et al, 2001). Therefore, a related research question is whether there is a difference in use of social ties and performance of TNVs depending on whether focal actors from family are the first or second-generation migrants.

TNVs offer a fertile opportunity to explore the nature of control and co-ordination outside the ontext of MNCs (Dabic, González-Loureiro, & Harvey, 2015; Massingham, 2010). Saxenian and Hsu (2001) suggest that the transnational linkages of TEs may supersede conventional international business relationships, and the MNC may no longer be the preferred organizational vehicle for transferring knowledge or personnel across geographic boundaries. Yet, little is known about the organization and co-ordination of transnational activities or performance of their ventures (Discua Cruz & Basco, 2017). It may be interesting to understand the way TEs and their managers apportion responsibilities and build social capital in a situation of commitment to two different work units in host and home countries (Collings, Scullion, & Harvey, 2009; Harvey, Novicevic, & Garrison, 2005).

Focus of this Special Issue

We aim to explore in this Special Issue the role of networks and resources, origin and location (national context), in the cross-border entrepreneurial activity of migrant entrepreneurs and TEs traversing geographic boundaries, and differences in their strategies and outcomes from those of international entrepreneurs. This Special Issue presents an opportunity to explore the heterogeneity of migrant entrepreneurs and TEs in terms of different roles and positions including family business owners and managers (Elo & Riddle, 2016), first- and second-generation migrants, as well as those originating from developed or developing home countries. The overall objective is to develop a more robust scholarly interest in migrant and transnational entrepreneurship, and provide novel insights to advance IE theory using a combination of multidisciplinary and/or multi-method approaches, especially in emerging economy contexts. Focal themes and representative research questions for this Special Issue are outlined below:

All submissions must be uploaded electronically at: https://peerreview.sagepub.com/eie

———. (2011). From ‘break out’ to ‘breakthrough’: Successful market strategies of immigrant entrepreneurs in the UK. International Journal of Entrepreneurship, 15, 1–24.

Lewin, A., & Zhong, X. (2013). The evolving diaspora of talent: A perspective on trends and implications for sourcing science and engineering work. Journal of International Management, 19(1), 6–13.

Portes, A. (1995). Economic sociology and the sociology of immigration: A conceptual overview. In A. Portes (Ed.), The Economic Sociology of Immigration (pp. 1–41). New York, NY: Russel Sage Foundation.

Saxenian, A. (2002). Transnational communities and the evolution of global production networks: The cases of Taiwan, China and India. Industry and Innovation, 9(3), 183–202.

———. (2005). From brain drain to brain circulation: Transnational communities and regional upgrading in India and China. Studies in Comparative International Development, 40(2), 35–61.